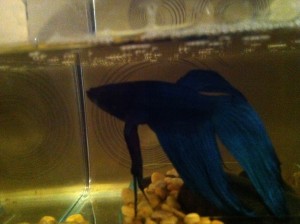 My family were always dog people. So much so, that I can’t remember a time from my childhood where there wasn’t a dog running around the house. Before we had kids, my wife and I had a Husky named Bacardi (keep in mind that my wife won that battle,  I wanted to call him Crown Royal). He was a great dog but the amount of hair he left around the house coupled with his hyperactivity and a new baby meant one of the two had to go.

We chose to keep the baby but found an amazing family with a huge yard for Bacardi to play in. It was a tough day for both of us but we know we did the right thing by letting the dog go, he wouldn’t have got the attention he deserved with a baby around. We’ve kept in touch with the family that took him and all is well.

My dear wife, thinking the kids were ready for pets, decided they should each get a pet fish (Daisy and Mater) for their birthdays (which are 2 days apart). I didn’t fight it too hard, after all, how hard can fish be to maintain? The answer to that question came about 2 weeks in, when the first fish, Daisy, suddenly died of natural causes…

As I was starting to panic about how I unprepared I was to have the “death” discussion with the kids, I realized that not only had they not noticed the fish had died, they had forgotten about the fish altogether. Somewhat relieved, I sent Daisy off on a swirly journey to fishy heaven and went about my business.

Later that day, we (read:my wife) decided that we should replace the fish with another one, just in case the kids noticed we were one fish down. Off Daddy went to the pet store to get a replacement fish, to be named Daisy 2. What happened next at the Pet Store was probably one of the most unexpected and humiliating things that’s ever happened to me.

There I was in the fish aisle, looking for Daisy 2, when the small fish “expert” came to see if I needed any help. I explained the situation as delicately as a man could, “stupid fish died, need another stupid fish before the kids notice the last stupid fish is missing”. Apparently my story didn’t jive with the clerk, who laced into a tirade that would have made Ace Ventura proud. It was clear to me why this clerk had been hired by the pet store and it also made me think about how many fish posters this person had plastered throughout their home.

After feigning regret for a few minutes I had found my Daisy 2 and proceeded to the check out, where my fish story had obviously been told and a lecture from the cashier ensued. I wanted to scream, “It’s Just A Fish, Get Over It!!!”, but held my tongue and made my way home to sneak Daisy 2 into her new tank as Daddy the Hero would do.

Just as the kids hadn’t noticed a fish was gone, they also didn’t notice that Daisy had completely changed colours. This turned into a good thing, as Daisy 2’s health didn’t last nearly as long as the year we were told it would. In fact, it lasted about 3 weeks before she too met her fate. It was embarrassing really, to not be able to keep a fish alive for longer than a month! We did everything we were told to but it still didn’t work out for poor Daisy 2.

I decided there was no way I was going back to the pet store for another round of booing and hissing, so we were down to 1 fish and the kids were none the wiser. Eventually my son began to pay attention to the remaining fish and surprisingly never asked what had happened to Daisy 1. He decided the fish’s new name would be Lanny, the lovable elf from Disney’s Prep & Landing movies. About once a month he decides to show the fish some love and asks if he can feed it and he talks to it for awhile.

My daughter still doesn’t bother paying any attention to it, there’s plenty more important things like Barbie and Hide and Seek for her to be bothered by something that just floats in a box and does nothing entertaining. Maybe someday she’ll be interested but I imagine she’ll go straight to wanting a dog judging by the way she reacts around them. But that’s a story for another day.

As for the fish, he must feel completely lost up there on his lonely perch. Not knowing what your name is can be very confusing when you’re trying to meet the lady fish and hes had a lot of them. Here’s a detailed list of all the names I’ve heard called to date: Mater, Lanny, Wayne, Zerby (??? I know), Mater again, Nemo, Flounder, Mater once again and just this morning when I asked my son what my next post should be about, he said it should be about Doc. Based on the post, I imagine you could guess who Doc is…

Do your kids have funny names for their pets? Let me know in the comments section and thanks for reading!! 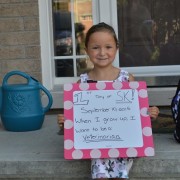 I Can't Wait For @Disneyland To Open #CarsLand This June!

Don't Panic, Here's A One Stop Shop For Your Kids Christmas Needs