From my childhood, I seem to remember Disney On Ice as being Mickey and his crew skating around for half an hour, with no clear objective and random Disney tunes playing in the background. How times have changed. Then again, I sometimes also forget what I had for lunch the previous day and I lose my car keys at least twice a week so my childhood memory could be skewed.

Of course, I have no concept of dollar value from 25 years ago, so whether it was worth my parents hard earned money or not, I have no idea. What I do understand is today’s dollar value and I’m here to break down what I saw last night.

Let’s start from the top. There were 4 of us going to the show with children under 2 being free. That’s great until you realize that it means no 4th seat for coats/bags/etc. Don’t under estimate the importance of the extra seat. We didn’t pay for the extra seat and here’s the breakdown on why.

– 3 Tickets @ $15 each, we got them through one of those Groupon type sites so it wasn’t a bad deal until you get hit with the fees associated to the tickets. What should have been $45 quickly turned into $70. FAIL.

– 1 Tinkerbell doll – $24; 1 set of Incredibles’ figurines – $30 ( The figurine set was actually reasonably priced so props to that). The doll is a FAIL though, lol.

That was it for the spending, the entire evening came out to about $165 for the 4 of us, which I guess isn’t the worst. Plus we could have had dinner at home before hand but I worked until about 10 minutes before we had to leave. Plus, the toys were technically the kids Valentine’s Day presents, as were the tickets I guess, spoiled much?

On to the show! We had some great seats, thanks to my beautiful wife. We were about 5 rows up from the ice, right in the center and on the aisle, which I find to be a huge deal with little kids. The show started at 7pm, so I expected to be driving home by about 8:15pm…wrong!

I’m not going to breakdown the whole show, just the highlights as I noticed them. For the most part, men are less interested in things like figure skating and Disney princesses than they are with hockey and heist movies (my favorite). This event was no exception for me.

For me, events like this provide me with two joys. The first is watching the excitement on my own kids faces when they get to see all their favorite characters up close. Nothing gives me more joy than seeing my kids happy and Disney On Ice does the job well.

The second thing I get to do during these outings is people watch. Don’t pretend you don’t do it, we all do it to varying degrees. My degree happens to be a high one as this is one of my favorite pastimes and Disney On Ice does not disappoint!

Within seconds of sitting down, an older usher asks my wife this question about my daughter, “She’s cute, are you still nursing her?”, WHAT?! He then went on to explain that they had a specific section set aside for nursing mothers. My wife politely declined and he went on his way. Here’s some thoughts on this interaction.

First, I actually thought he meant that they had a day care on site to watch young kids during the show, this is because I am a man and couldn’t imagine ever asking a woman if she was still breastfeeding and honestly, I couldn’t care less if she was. My second reaction was, did his employer put him up to asking every mother with a younger looking child if they are still breastfeeding so they could use the magical Disney Breastfeeding Center in section 203? If so, I now feel for the usher because that’s way worse than your wife asking you to buy her feminine products.

We were lucky enough to have a couple Disney characters sitting right in our row too, which was nice. Remember Skippy from Family Ties? He was sitting right next to me and was more into the show than any kid I saw the whole time we were there. The downside to this fellow is that he was 9 feet tall and was seriously encroaching onto my side of the seating plan. I let it go for the sake of my children but I could have taken him if I wanted to, lol.

We also had this woman in our row. I`m not really sure if she was with anyone but she had the huge fur coat and was really into staring at random people for no good reason. I gave her a pass when I realized that I was doing the exact same thing, minus the fur coat and with a little more tact. I kept waiting for Dalmatians to come running from under her seat but it never happened. I guess Cruella De Vil wasn’t a part of the show.

As for the actual show, not much to report. My son has the same face at every single event we’ve ever gone to. It’s a face that has me constantly him if he is enjoying himself because it’s impossible to read. Need some examples? Here’s some live action shots from The Wiggles, Backyardigans and Disney on Ice from last year.

As for Julia, she couldn’t have been created any more opposite from her brother. I honestly thought we were going to have to take her to CHEO when Minnie Mouse (her favorite) finally came out. She started shaking uncontrollably and pointing to the ice yelling “Mouse, mouse, mouse!!!!!”, to the point where she started crying and scaring her parents. Here’s what her Disney experience looks like. 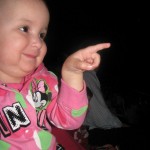 My Mom used to tell me that I would do they shaking/crying thing when Ernie and Bert would come on TV and I always called her a liar and said I would never do that. I guess I owe an apology now because I have passed this trait on to my daughter…

The rest of the night went about according to plan, except for the length of the show. Every time I thought it was ending, a new princess would come flying out, ruining my aspirations for a good night’s sleep.

At the very end, all the characters came out for one final number. The only problem I had with this is that we had bought my son a set of Incredibles figures to remember the trip (read:keep him happy) and while the Incredibles had opened the show, they didn’t come out at the end?! Here he was holding up his guys for all to see but his heroes were a no show. Instead, we got to see characters that weren’t in the show in the first place – Yeah, I’m talking to you Mulan!

Overall, expensive but great family night out and we even got a treat on the way home as my son and I had this memorable conversation.

Did you take your kids to Disney On Ice? Let me know in the comments section how you enjoyed your experience?

Bieber, Prostitution, Trophy Dads & My Rap on The Life of Dad Podcast

Who Wants To Win Their Very Own Fathead? {Giveaway}{CAN/US} 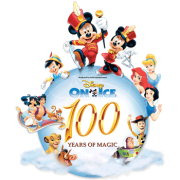