Blog Roll
You are here: Home1 / Blog Roll2 / THE BLOG3 / The Tooth Fairy Is An Extortionist
Share....

That’s right, I said it!

I can remember the days of losing teeth and the excitement that would come over waking up the next morning to find a shiny quarter or two under my pillow.

I was having a very deep and serious chat with some friends the other night at a wedding.

We were laughing at old(er) people dancing and somehow the topic of missing teeth came up, to which one friend had an interesting story to share about his children.

He said that one of his children had just lost a tooth and after researching with other parents, he found that the going rate on teeth these days was about $5 a piece, so that’s what he paid.

I laughed at his hilarious joke and turned back to the dance floor. He then grabbed me by the arm, looked deep into my eyes and told me something I will never forget.

“I’m not joking man, the Tooth Fairy is a thieving little bitch and she charges $5 a tooth now!”

The words came at me in slow motion, like I was a stunned boxer who’d just had his bell rung.

This couldn’t be true! My kids hadn’t even lost any teeth yet and at this rate of inflation, by the time they do, I’ll be paying double that price!

Who does this chick think she is? Monopolizing the teeth market by being the only one who dares sneak into young children’s rooms at night to help herself to their lost ivory.

It’s common knowledge among adults that the money left under the pillow is not left there by the tooth fairy, but it is a bounty paid by parents so that the tooth fairy does her job properly.

Otherwise, the tooth would still be there in the morning and the parent would have to explain what happened. Explain why the Tooth Fairy doesn’t love their child.

My friend’s story got me panicking so I started to do some research of my own. The first person I asked was a colleague at work.

Bad Start! If the cheap guy is paying $2, that means I stand to be in big, big trouble.

The trend continues to confirm my fears that I will need to re-mortgage the house in order to pay for two kids to lose all their teeth.

It also puts the final nail in the “Should we have a third child” debate.

I’ve been racking my brain on ways to avoid this inevitable mess but so far I’ve only come up with one possible idea….

I’m going to try opening my own tooth fairy business! What do you think? It suits me, right? 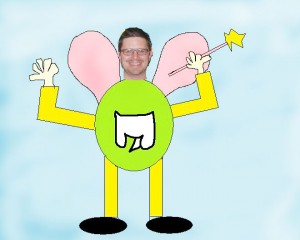 We’ll see what the Tooth Fairy’s goons have to say about that but I’m ready for them.

No more will I stand idly by as she treats us parents like her slaves!!! We will band together to fight this injustice!

She may continue to try and take our hard earned money, but she will Never Take Our Freedom!!!!!

Who’s with me? What price does the Tooth Fairy charge at your house? Leave me a comment below and we can all share in each other’s misery…

Are Rules Really Meant To Be Broken?

My @AdultEssentials Vitamin Challenge Wrap Up! Gummies Anyone?

Celebrate Father's Day With A Giveaway From Crown Royal

My Addiction To Infomercials Revealed!

I Saw A Million Faces; Well, You Know The Rest! #BlissDomCA

The Most Awesome Snow White I've Ever Met
36 replies