Star Wars has provided me with so much joy over the years, with no line being repeated more than the classic Darth Vader shocker, “Luke, I am your father”. To celebrate the upcoming Father’s Day celebrations, I thought I would share my Top 7 “I am your father” moments! Here we go:

7. That time I told the kids to clear their plates after lunch but they forgot and then went to play outside with their friends and then found the same old half-eaten food on their plates for dinner.

6. When the kids were supposed to shower but defiantly avoided it, so I pretended the shower was broken for a week so they could be the smelly kids at school. Lessons learned.

5. When my son threatened to run away because I wouldn’t let him play on his iPad for an extra half hour and then called his bluff by letting him put his shoes on and walking all the way down the street, only to have him realize it was a bad idea and quickly run back home.

4. The day I became the “Worst Dad Ever” for not buying the toy my kid wanted, 5 minutes before their best friend invited them over for a playdate that they needed a ride to.

3. When I told the kids to bring their toys in from outside in case it rained because I wouldn’t replace them, only to have it rain on their not brought in toys, ruining them for good.

2. When my kids found out they loved sports, so my wife and I took on extra jobs to help pay for the costs of competitive sports fees because we want the kids to have the opportunity to explore their full potentials.

1. The day I realized that I get to wake up and experience something new and amazing with these kids every single day and loving every second of it regardless of whether it’s good or bad.

As you can see, for better or worse, there are plenty of “I am your father” moments throughout the days and I absolutely wouldn’t have it any other way. Speaking of that, check out this amazing Happy ‘I Am Your Father’s Day’ video made especially for the Star Wars fans out there!

How cool was that?! Now I want to hear some of your “I am your father” moments, whether they’re happy, funny or other, and I have a great Star Wars prize pack to give away to help make your Father’s Day that much more special! All you have to do to enter is using the Rafflecopter form below and I’ll pick a winner in a few days.

Disclosure: I was compensated for my participation in this program, but I really am a father…

9 Gifts Dad Would Love To Receive This Father's Day! 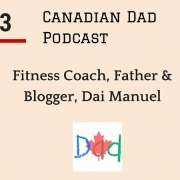 There Is No Greater Love Than The Love Of A Sibling

Dads Sing Mariah Carey's "All I Want For Christmas"

Funniest Parenting Tweets of the Week!

Try The New Subway® Canada Panini On Me!

Under Armour & Sport Chek Are Looking For The 2018 Team UA NEXT Canadian...
Scroll to top