Imagine a world where you could swing from tall building to tall building. A place where you were counted on by millions to save the day! You could have your own statue and people would chant your name in the streets as you swung on by.

That’s the world I dreamt about one day having, but those dreams have since come crashing down. You see, my young son also has aspirations of swinging from building to building as the amazing Spider-Man and that’s where my dreams end.

Have you ever tried to rationalize with a 3 year old? It goes something like this.

And so on and so on. You can imagine the way the debate goes when he’s arguing for something he really wants. In this article’s case, it’s the chance to become Spider-Man for our daily super hero showdown.

Sure I could pick from any number of other super heroes but it’s just not the same. Here’s how I break down the other choices.

Batman is cool and all but he’s so dark that people don’t want to hang out with him or cheer his name. They’re more afraid that he could snap at any minute and go rogue on all their asses. Not to mention his alter ego, Bruce Wayne, is a complete jackass playboy millionaire. Actually, that doesn’t sound so bad…

Superman would probably be my number 3 option but that’s most likely due to the fact that the actor who played him, Christopher Reeve, has a name very similar to my own. Also, Superman’s alter ego, Clark Kent, is a little too weird for me. Grow some balls man and stop being such a klutz dude!

Iron Man is relatively new to the scene, Ironman seems like someone to keep an eye on for all you superhero dad’s out there. I like the cut of his jib, in and out of costume. Tony Stark seems like a cool cat, albeit a little neurotic. The only issue is that people still aren’t sure about Iron Man, so the glory part is missing. In the end, I usually pick Iron Man as my go to guy when my Spiderman dreams go south.

Cat Woman would be an excellent choice but I am missing one key element which keeps me from becoming Catwoman and I’m sure you can probably guess what it is. That’s correct, I don’t have a cat suit. Nuts.

As you can see from the above breakdown, none of these options is even close to being as cool as Spiderman. He has so much to offer and I feel like we are a lot alike.

– Peter Parker works as a photographer for the Daily Bugle, while I sometimes add pictures to my blog.
– Spider-Man often saves the world by foiling other super villain’s plans, while at my day job, I save the world by helping to put petty criminals behind bars.
– Peter Parker is kind of nerdy but also sticks up for himself when he needs to, and I often find myself in situations where I should speak up. Plus I am also a nerd.
– Finally, Spider-Man is loved by all and has droves of fans all over the world, while that is how I am perceived by all as well. At least in my own fantasy land, called Chris-Ville (Facebook game coming to a screen near you).

I wish there was a way for me to get this across to my son. He doesn’t even know who Spider-Man is. He’s never seen the movie, tv show or comics. He only knows about Spider-Man from Halloween so I don’t see how it’s fair the he always gets to portray him.

If the world needed a real super hero to save them, would they choose a 3 year old or a slightly overweight grown man. Sure I’m a little short and I use the term “slighty” overweight loosely but c’mon man, a 3 year old?

Something has to give, but so far, my attempts to get him interested in other super heroes have fallen by the wayside. He is firm in his belief that he is in fact Spider-Man as I am forced to continue selecting second rate super heroes.

Do your kids have a favorite character they like to be? Do you know how to get my son to hate Spider-Man? Please, I’m begging you to let me know what I need to do to get this done. Let me know in the comments section.

Also, please feel free to share this post with your favorite social media outlet. I am on so many sites now, I don’t know which way is up. Pin Me I guess…..I don’t get Pinterest yet.

What Do Dads Really Want For Father's Day?

Not Even Spider-Man Can Stop My Kid 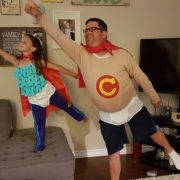 Win Tickets To The Amazing Spider-Man: An @IMAX 3D Experience