Tag Archive for: calm the f*ck down 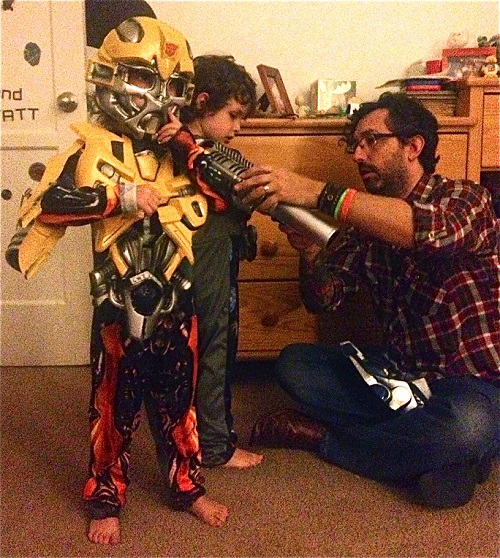 This week, I’m excited to welcome the creator of the mega viral “Calm The F*ck Down” parenting method, The Daddy Complex master and very funny, Mr. David Vienna! I had the chance to meet David in Houston last January for the Dad 2.0 Summit and he is exactly as he is on his site, which is a great thing. I had the chance to ask him a few questions about his blog and fatherhood and hope you enjoy what he had to say.

CD: Why did you start blogging?

David: To maintain my sanity. I was a work-at-home dad and had what psychologists would probably classify as a nervous breakdown about twice a week. Both my dad and my wife suggested I start the blog. I was so frazzled, they could’ve told me to start building a rocket ship and I’d have done it.

CD: How would you describe your blogging style?

David: Like scat. Both the jazz singing style and the poo style.

CD: What has been your biggest challenge as a father?

David: Convincing my kids they need to find jobs. I tried explaining the value of a hard day’s work, but they just want to play with Legos, the freeloaders.

CD: What one piece of advice would you give to a new Dad?

David: Designate a place in your home to be your “Weeping Area.” Closets work well, as does the cupboard under the kitchen sink.

CD: Your post about the “CTFD” parenting method went mega viral. Can you talk a little about what that was like and what, if anything, came from that exposure?

David: It was cray-cray, man. So many people have — and still do — find use for it. There’s even a clinic in Michigan that offers classes in how to implement the CTFD Method. I like that it’s become a sort of battle cry for parents. And the exposure/success of the post opened a bunch of doors. I got a book deal, appeared on the Today show (not to talk about CTFD, but that’s how I ended up on their radar) and my name keeps getting mentioned alongside Amy Chua. I guess I’m like the anti-Tiger Mother.

CD: What is your social media weapon of choice and why?

David: Tumblr. Because my site is a Tumblr blog and the built-in community there helped me hone my blogging voice and achieve a shit-load of goals. There’s a huge parenting contingent there and we all support each other. Plus, we have cat gifs.

CD: How has blogging affected your life?

David: It gave me the audience and interaction I previously tried to achieve with my epic monkey vs. robot rock opera.

Thanks a million to David for taking the time to answer my questions! You can check him out on twitter @TheDaddyComplex or at The Daddy Complex blog.

A Gift From David at Dad 2.0 Summit. Chewbacca vs. Iron Man