Tag Archive for: The Hulk 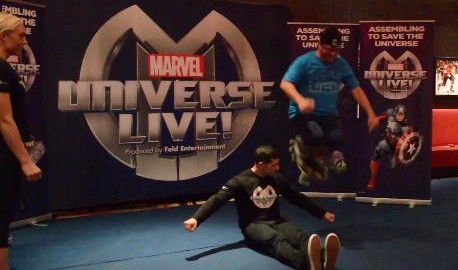 Blogging is such a funny thing. There are so many times that I am left pinching myself at some of the cool opportunities that have come my way and there were plenty of new pinch marks on my arms after this past weekend.

I had the opportunity to meet Hayley and Josh Murillo, who are cast members of the Marvel Universe Live show that is touring North America right now. Not only did I get a chance to meet them but they also took me through one of the workouts the cast uses to keep fit for the show. I’m not going to lie, it was a physically humbling experience and something I definitely felt the next day. Luckily for all of you I recorded the whole humiliating exercise and you can now watch it below…

Later that same night I took my family to the actual Marvel Universe live show and have to say that it was absolutely outstanding! Seriously, the motorcycle stunts alone would have been worth the price of admission but to see all of my favourite superheroes standing right in front of me sent me into a full on geek attack. I don’t want to spoil the show for anyone so I will simply say that when the Hulk appears for the first time we were all in awe of his costume and performance.

If you have children who love comics or if you are a huge fan of the Marvel Universe you need to go see this show. The production value was second to none and you are left shaking your head at some of the stunts the performers pull off during the show. They is flying, explosions, people on fire and Xmen. What more could you ask for??

Alright, I’ve talked enough. Please take a couple minutes to check out my interview and workout with the cast of Marvel Universe Live! Also, thank you so much to Feld Entertainment and the Canadian Tire Centre for allowing me to continuing doing my thing!