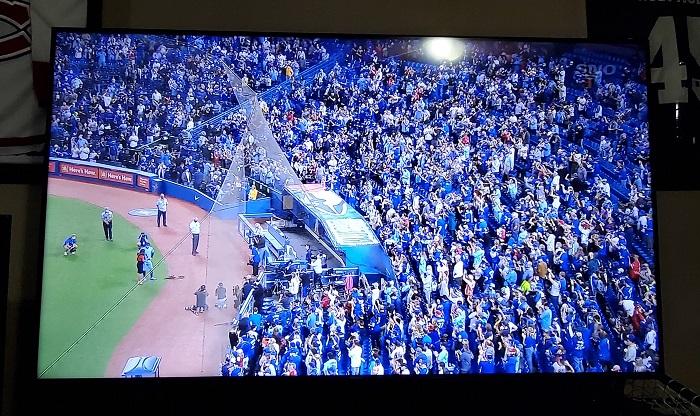 If this pandemic has been good for anything, it has allowed me to explore what has been going on in the world of television. With all the running around between work and the sports my kids take part in, there hasn’t been much time to just sit and space out with a good show. As it turns out, I was further behind than I thought and have been slowly catching up ever since.

I partnered with Hisense Canada, and using their 4K Android TV I have created a list of the Top 5 shows I have been watching while we were stuck in lockdown. In fact, Hisense Canada are so cool that after finding out that I was enjoying the 4K Android TV that I purchased, they donated one to our youth baseball team to raffle off in our fundraiser!

I was very skeptical that this could work. There have been so many remakes and re-releases of old shows that have been truly terrible that the odds were not great for Cobra Kai. Well, the reason there are odds is that sometimes they get broken and I have to say that all 3 seasons of Cobra Kai have been outstanding and I can’t wait to see what happens next!

I have to admit, after watching Avengers: Endgame I was a little worried about suffering from Marvel fatigue. After getting through a slow first episode of WandaVision I was pleasantly surprised with how amazing this show became. They really made it feel like you were watching mini movies and I know I’m not the only one who got upset every time the end credits began to roll. Honourable mention to both Loki and The Falcon and the Winter Soldier which were also incredible!

I only found out about this show because of the endless memes of it that are posted on TikTok. Not only is this my favourite of all the new shows I’ve started watching but it has creeped into my top 10 all-time list and is slowly creeping into my top 5. I still have 4 seasons to watch so anything can happen but I’m both happy and upset that I hadn’t heard anything about this show sooner.

This is without a doubt my favourite show of all-time. I watch a minimum of 1 episode per day and I’m not even ashamed of the amount of time I waste on it because it’s that good. There isn’t a single episode that I don’t like and if Dwight, Jim or Pam ever come to a local Comicon I will be first in line. Probably still with a mask on…

What can I say about Ted Lasso that hasn’t already been said? This show is the breath of fresh air that I’ve been looking for throughout the pandemic, and beyond. I laugh, I cry and I wait impatiently for the new episode each and every Ted Lasso Friday. I love the balance they’ve struck between funny and serious as they tackle our everyday issues in a subtle but very real way. It is now officially my number 2 favourite show behind The Office but I can see it making the leap if it stays this good!

Honourable mention goes out to every sport on TV, as I have also been enjoying quite a bit of live sports from the comfort of my couch. Honestly, the Hisense 4K Android TV screen is so clear that I forget about lockdowns because it feels like I’m at the event! Since it looks like we’ll be travelling a bit less for a while longer, please feel free to drop a comment with some of your favourite shows or some shows/movies you discovered while stuck inside. Thanks for reading!!!

Thoughts From The Mind Of A 12 Year Old

Getting Reacquainted With The Kitchen
Scroll to top