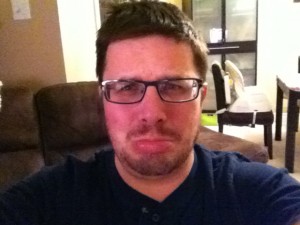 If you’ve ever seen the TV show Friends, my wife would have accurately described me as the character Chandler. There was a specific episode where they revealed that Chandler couldn’t cry at anything that normal society deemed to be “emotional”. I was no different than him. Sad movies, TV shows, general life moments, I had no ability to cry. It’s not that I had no emotion, I just didn’t show it by turning on my eye faucets.

So, after drying my eyes at the end of the movie “Real Steel” yesterday, it occurred to me that I am a lot more emotional than I used to be. Things that used to make me feel like I wasn’t normal for not crying at are completely sucking the testosterone out of me and replacing it with estrogen.

I started noticing the changes shortly after my father passed away 5 years ago. Here is a really nice article that was done by a sports writer here in Ottawa about him. We even started a foundation in his name, where we give back to underprivileged children who can’t afford to compete in sports. It’s called The Gil Read Memorial Foundation and I’m proud to be a part of it.

Shameless plug over. The changes were small at first. I had always welled up during the movie Rudy (what guy doesn’t) but for some reason, there was now a strange liquid pouring out of my eyes when Rudy takes to the field for the first time, with his fist pumping and a very overweight Jon Favreau uttering my favourite line of the movie “Who’s the Wild Man now”!

I remember starting to cry during an episode of American Idol when there was a contestant with a particularly touching story about his father. I remember my exact thought at that moment, “What the F*ck is going on here?!” I realized at that moment that everything had changed. In fact, to this day, any story/commercial/song/grocery flyer that had anything to do with a father/son, brings on this well of emotion that I have no control over.

Just as I had come to terms with this new, blubbering version of myself and had even found ways to disguise it, my wife gave birth to my son and all bets were off.

I now have 2 children and every day they grow older is a day that I get a little bit less manly. I think the first real indicator was when I started feeling the tingles in my chest while trying to fight back tears during Finding Nemo. I mean, what was this feeling I was having? Clearly my brain was confused. After all, this was just a cartoon movie.

Nowadays it seems like everything sets me off, especially anything involving kids. From episodes of Criminal Minds and American Idol to movies like Lord of The Rings, Toy Story 3 & the aforementioned Real Steel, I am a blubbering mess. If you haven’t seen it yet, Real Steel is a movie about Robot Boxing….yep, cried.

I should point out that I don’t think it’s a bad thing to be moved by things and I know that there are reasons for the changes. It’s just a big change to go through, especially for me, considering I had barely cried up until about 5 years ago and now I can barely fight it off during shows like Man vs. Food.

Have you guys noticed any changes in the way you react to movies/shows since you’ve had children? Ladies, feel free to rat out your men here, they’re not reading anyway and I won’t tell them!