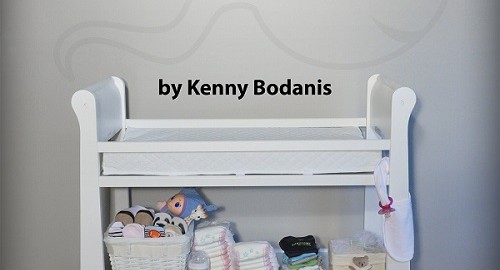 It occurred to me while I was reading “Men Get Pregnant, Too”, by Kenny Bodanis, that there aren’t a lot of books out there for dads. I noticed this as I nodded my head along with the stories Kenny tells in the book and found myself wishing that there had been something out there like this prior to my having children. Kenny Bodanis is an award winning, Canadian blogger and radio & television parenting columnist, who lives with his wife and two children in Montreal.

My favourite thing about “Men Get Pregnant, Too”, which shares the same name as Bodanis’ blog, is that he doesn’t hold back in the stories he tells. Another thing I enjoyed was how he added pet peeves and tips for men who are about to enter into fatherhood, such as

“Plug in. Have answers. Be interested. Not for everyone else but as a reminder to your spouse that her husband is excited to be a dad.”

Reading this, I wished I had a time machine so I could go back and do it better.

Kenny also talks at length about the different emotions and stresses that fathers face and tries to help encourage dad to own those emotions. This is also something that I failed miserably at with my first child and didn’t figure out until I started writing about my experiences as a father. It’s important that dad doesn’t completely take a back seat during the pregnancy and Bodanis does a great job of explaining why that is so important.

With Father’s Day right around the corner, I can’t think of a better gift for dad than this book. It really covers almost everything you are going to come up against and does so in a light-hearted and very relatable voice. Men Get Pregnant, Too is available in both paperback and kindle versions on Amazon. You can also check out Kenny Bodanis on his Twitter and Facebook pages.