When the doctor informed my wife and I that we were going to be having a daughter, a wave of panic came over me. It wasn’t that I didn’t think I would be a good enough father, it was more the fact that I had spent so much of my life around guys that I wasn’t sure how different life would be with a little girl around. You see, it had been well over 70 years since there had been a girl born on my father’s side of the family. My grandfather had four sons, three of them had two sons each and then two of us had boys as our first children. To say the odds were against us having a daughter would be a giant understatement.

Still, there she was, a beautiful baby girl staring back at me, wrapped in a pink blanket and wearing a pink knitted hat. She has been in my life for just over five years now and I can honestly say that having a little girl has changed the way I think about almost everything. Just when I think I have her figured out she never fails to throw me a curve ball. She fell in love with princesses and ballet so I assumed she was going to be a girlie girl. Next thing I know she’s running Spartan Races, destroying rock walls and bowling kids over at her soccer games.

Just this past weekend we went camping at the KOA in Cardinal and they have a gigantic inflatable water slide. If I’m being completely honest, I’m a bit of a scaredy cat when it comes to rides and heights in general so I was hoping my kids wouldn’t be interested in the water slide. I got off the hook with my son because he was preoccupied with the Kids Bingo event but I could tell by the daredevil look in her eyes that there would be no denying her this adventure. Due to her lack of height she needed a parent to go up the ladder with her and, after my wife vanished in a puff of smoke, I ended up drawing the short straw. Here is an example of what we were going up against, although the picture does it no justice. 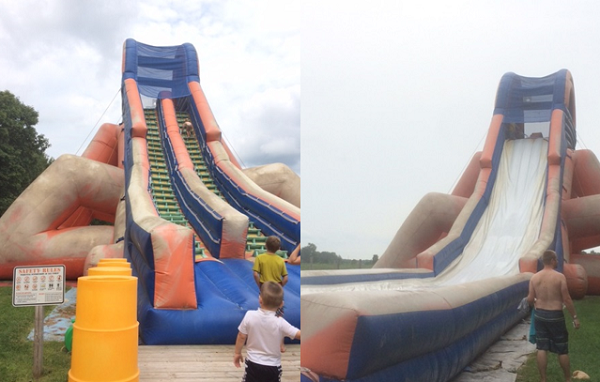 A funny thing happened on the way up to the top of the slide. My fear of heights vanished and was instead replaced by pride at watching her fearlessly climb her way to the top. As it turns out, her fearlessness helped me conquer one of my fears, which was a lot to process afterward. As we conquered the slide together I was reminded of the new Quaker video, The Recital (shown below), from earlier in the week and have since vowed to do more crazy and goofy things with my kids going forward. Life had gotten a little too serious lately and when that happens it can be easy to lose sight of what’s important. Let your freak flag fly, people, and enjoy the smiles that follow!