Blog Roll
You are here: Home1 / Blog Roll2 / THE BLOG3 / The Ninja Turtle Heard Round The World

Well, now you’ve all gone and done it, internet. My poor, innocent young boy, who knew nothing of the internet is now a raging attention seeker looking for his next fix. Every night before bed time, my kids get between 30 minutes to an hour of creative time in their rooms. This can include doing crafts, colouring, dancing, singing or whatever, as long it is something creative. The other night, my son decided to practice his scissor skills and made this very cool Teenage Mutant Ninja Turtle, Leonardo craft.

He told me it was for my desk at work, an offer which he has since rescinded, and I was so impressed that I shared it on all my social networks. In passing, I mentioned to him that you guys liked it too and told him it had garnered 30 “Likes” in under a half an hour, plus read him a few of the comments. Had I known what his reaction to this was going to be, I probably would have just left it alone. In the next thirty minutes, he asked me how many people liked it over 3,000 times (numbers may be exaggerated) and like a rookie I checked every time.

When the picture reached 70 likes I jokingly told him he was internet famous, to which he replied, “I know, it’s because I make great stuff”… Monster. Created. Not one to make his living off one work of art, my son then proceeded to create the rest of the ninja turtle team, and then quickly asked me to take a picture of it so he could see how many people would like it on the computer. I took the picture but told him we needed to wait a couple days to avoid turtle burnout.

That brings us to today. His newest work is shown in the header of this post and seeing as how you are the ones who created this monster by liking his original work, I figured that you should probably leave a comment here telling him what you think of his complete collection of ninja turtles. I mean, do you really want to break his little heart?

Are We There Yet??

My Interview on Family Matters With CJAD800’s Ric & Suzanne 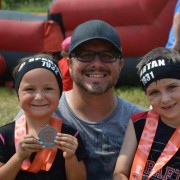 How To Build Your Very Own Escape Room For Kids!

The Smile That Stopped The World
9 replies

A Weekend To Remember At The Brookstreet Hotel. See Also: How To Tire Out Your...