Something people may not know about me is that before I became a blogger, I went through a pretty hard core phase as a contester. I’m not talking about entering a couple contests here and there either. I mean full blown, spreadsheet creating, madness! I have probably entered about five contests in my first year as a blogger and this past weekend I was lucky enough to win a weekend stay at a hotel right in my own town, the Ottawa Marriott.

After breaking the good news to my wife, we decided to spend one night in the hotel with the kids and one night with just the two of us. A huge thanks to my Mom for watching the kids on the second night to allow us to have our first night away in almost two years! We got there and immediately headed down to the kids play room. I had heard about this from a few friends and couldn’t wait to check it out for myself. As expected, the kids had a blast and negotiated their way to an extra 15 minutes of play time. They probably could have scored an extra 30 minutes, but don’t tell them that.

The kids love staying in hotels and we decided to get a king sized bed so we could all sleep together. I knew that meant we would get a little less sleep and I even took a few shots to the face from the boy, but it was totally worth it to see their smiling faces. And just in case anyone from the Marriott reads this, I promised that the kids would jump on the bed and I always keep my promises. I even threw in a little extra… 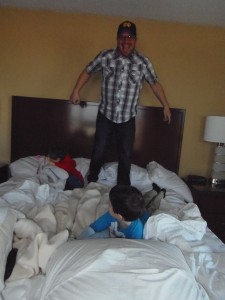 Daddy jumps on beds too!

As much fun as night one had been, I was definitely looking forward to some husband and wife time. It had been so long since we could just go out to enjoy a dinner without worrying about how late it was. We enjoyed a nice dinner at the Hard Rock and headed back to the hotel to watch a movie. Unfortunately the movie channel was broken, so we were left without many options on TV on a Saturday night.

Fortunately, if I taught my wife anything about social media, it is that excellent brands always come through in the clutch! She had just started to discover the world of twitter and expressed her disappointment over not being able to watch a movie together. Two minutes later, the phone rang and it was the manager of the hotel, who mentioned they saw her tweet and wanted to make it right. They offered to bring up a DVD player and some movies for us, which I appreciated but declined. That would have been enough for me but they decided to go the extra mile and offered us breakfast in bed for two the next morning. JOY!

I took so much away from this weekend and have felt extremely energized ever since. It’s so important to take the time to unwind, both as a family and as a couple. To be able to do it right in our own backyard was icing on the cake. This is not a sponsored post in any way but I want to say a huge thank you to the Ottawa Marriott for your hospitality and amazing service. Also, thank you for having a Starbucks in the lobby!

Win A Family 4 Pack To See The Harlem Globetrotters! {Ottawa}

Funniest Parenting Tweets of the Week! 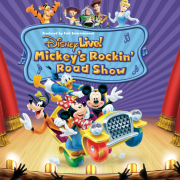 What Do I Stand For? Canadian Spotlight: When Children Inspire – Earth Hour Edition
Scroll to top