I came across this story on the CBC website and it was too amazing to not write about. Todd Churchill lives in Portugal Cove – St. Philips, NL with his wife Kimberly and their two sons Hunter and Carter. His youngest son, Carter, was diagnosed as profoundly deaf in December 2011 and then subsequently diagnosed with cerebral palsy in January 2012.

Since that time, Todd and his wife Kimberly have become very active in various fundraising efforts for local charities and non-profit organizations associated with or helping with their son Carter’s condition. This past July, they both participated in Easter Seals’ Drop Zone event in St. John’s and personally raised over $8,000 dollars.

Todd then decided that the logical next step would be to build an outdoor rink. This, however, was not just going to be any outdoor rink. Todd had a dream of designing and building a 95’ x 46’ outdoor ice hockey rink in his backyard, complete with boards, painted lines, nets, lighting, etc. His goal was to sell ad space on the boards and also on the ice surface, just like an NHL rink, with the proceeds going to support the three charities that have helped and continue to help his family the most. Those charities are:

I’ve included links to the donation pages of all three in case you are compelled to contribute. Todd’s got a website all set up that lists all the amazing sponsors, supporters and news about the rink and his family’s charitable efforts. The website is called Reason For The Rink and I hope you’ll stop in to check it out. I was also fortunate enough to interview Todd for this feature and here is what he had to say.

CD: Where did you get the idea to do this? It’s quite brilliant!

Todd: I received a photo of a similar, albeit smaller, rink done out in western Canada and I always wanted to do one as a personal challenge being an engineer. When my son was born and was diagnosed as deaf and with CP, my wife and I became very proactive in organizations dedicated to assisting children like Carter, namely Easter Seals NL, Rainbow Riders and Mazol Shriners. We both participated in the Easter Seals NL Drop Zone event (9 storey rappel) in July, personally raising over $8,000. As a result, I was invited to participate in the Easter Seals Toronto Drop Zone (17 storey’s). There are links to videos of both events on my website under “Other Fundraising Efforts“. My wife has a small home business called Carter’s Cupcakes, which makes cakes and cupcakes with 25% of the profits going to children’s charities associated with Carter. I started my rink as both a fundraiser and a way of increasing awareness of these organizations which I myself had no awareness of prior to Carter being born.

CD: Was the rink a community project or more of a solo effort?

Todd: It was a solo project that I started planning last winter but actually physically started in June building a prototype corner and straight section to work the bugs out of my design.

CD: Now that the rink is built, what are your goals for it? Will there be more fundraising or is it a community rink?

Todd: I am going to have to some fundraisers for people at work. I am currently working on the Hebron project here in NL so I am going to have a hockey tournament for employees of the major companies, ie. ExxonMobil, WorleyParsons, KCAD and Kiewit-Kvaerner Contractors. I have also been receiving a lot of offers to rent ice time with proceeds going to charity.

CD: How difficult was it to sell the ad space?

Todd: It was slow going at first as companies didn’t really know what to make of what I was doing. Some companies jumped right on board, while others needed some convincing and others never responded at all. After I launched my website, I had more demand than available spaces so City Honda here in St. John’s offered $1,000 for an in ice ad, which is something I never considered before. I was only going to have the charity logos in the ice, but I could not turn down that type of donation. Provincial Airlines, ExxonMobil (Hebron Project) and Ranstar* soon followed and took the remaining three in ice logos for $1000 as well. I have now raised over $16,700 to date.

This was such a great story and I was so glad to be able to speak with Todd about it. For more information about Todd’s charity rink or on how you can donate, you can visit his website, Reason For The Rink, and you can follow him on Twitter @Reason4TheRink.

I wanted to leave you with one last look at the finished product. Admittedly, this photo makes me want to hop on a plane and fly out to Newfoundland to take a lap on the ice. So, if anyone has an extra plane ticket to Newfoundland… Yeah, didn’t think so! I want to thank Todd Churchill for the interview and also for being an Awesome Dad and human being, along with his entire family. Keep up the great work! 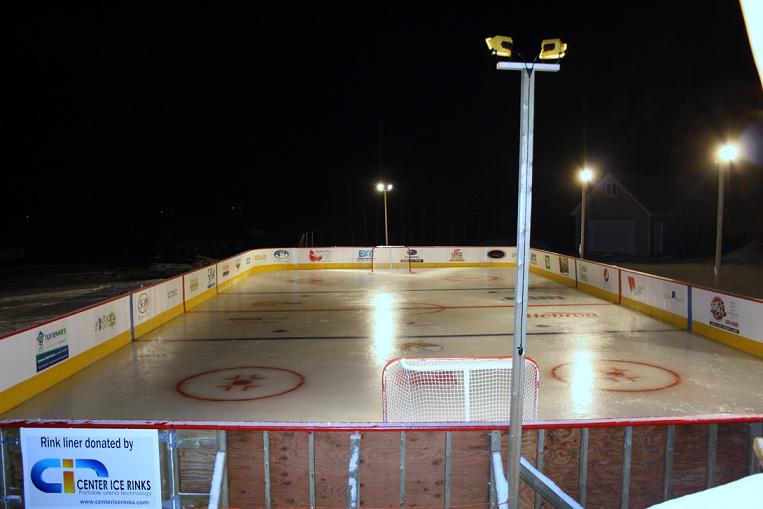 Can You Really Do What Makes You Happy?

The Do’s and Don’ts of Chainsaw Use!

I Was In Tim Hortons’ New Commercial! Well, Almost…

Who Wants To Win Their Very Own Fathead? {Giveaway}{CAN/US} Batman, Superman, Super Mario & The Avengers Walk Into a Cafe
Scroll to top