“18 more sleeps until Disney!”, the kids shouted with glee. That’s how early the countdown began. That’s how soon the magic starts to flow through your veins. I’d be lying if I said I wasn’t feeling it too, even though I worked hard at containing my excitement. At 35 years old, 18 days of uncontrolled excitement can cause burnout.

The trip didn’t get off to the magical start we had anticipated but a stranger on a plane helped restore our faith that all would be fine. Upon landing in Disney, because explaining the difference between Disney and Florida to a three year old is almost impossible, the kids loaded up on pixie dust while the grown ups focused on grown up things. Magical bags needed to be collected from the magical conveyor belt and children needed to be reigned in so they wouldn’t fly away in the busy airport.

The planning for this trip had been meticulously drawn out by the missus, down to the very last ride. Rain, however, was not on the agenda. In any other place on earth, rain would be a deal breaker. But not at Disney World. Not on this trip. Our smiles were as bright as ever as we crossed through the gates and into paradise, ponchos and all. The kids gripped their autograph books tight as the first character, Jake the Pirate, approached our breakfast table. Overwhelmed with excitement, my normally reserved young boy leaped from his seat and hugged Jake as tightly as he had ever hugged one of us. That was the magic of Disney.

There were many more hugs and smiles throughout the weekend. Some for us, but the most enthusiastic ones reserved for the characters they have grown up watching, which was more than fine by me. The magic was there for me too, just in a different place. Instead of the exhilaration of meeting the characters, my joy came in the form of watching the excitement on my children’s faces as they discovered a world they had only dreamed about. They were my Disney and I cherished every excited squeal they belted out.

There were more magical moments than I could count, from tears during Fantasmic to our emotional meeting with Mickey Mouse. The one that stands out to me, though, is when my three year old daughter snuggled up to me on our last day and said, “I love you more than Disney”. Impossible, but I’ll take it. 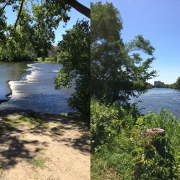 Add Some Style To Your Kids’ Lives With Peekaboo Beans

To The Woman In Seat 19D

It Never Truly Goes Away
Scroll to top