“C’mon, dad! Let’s go exploring!”, she yelled as she ran into the small forested area we would soon refer to as “The Jungle”. She didn’t need me to follow along but invited me anyway, which was nice. Though you wouldn’t know from the fearless way that she leaped into the woods, part of me wanted to believe that my presence made her feel safer in there.

We ran through the jungle carrying sticks, just in case we ran into trouble, and popped out at an old wooden bridge that covered a small stream. I tried to explain to her that this was the bridge I used to hide under with my friends when I was her age, but she was way ahead of me in making her way underneath. She’s adventurous, this one. Just like her dad was at that age. We played troll under the bridge for a few minutes, with her insisting on being the troll even though I was perfect for the part, before moving on to the next adventure at a nearby park.

As we walked down the pathway to the park, I felt like I was walking through my past. We passed the creek where I used to catch frogs, the baseball diamond where I found out that I made my first competitive team, the high school where I broke out of my shell, and the park that I spent countless hours pushing my limits. You’d think twenty plus years would have had their way with these places but they all looked exactly the same as I had left them.

Exploring is tough work, so while I didn’t get the chance to stop and take in all the memories that were crashing around in my brain, I did relish the opportunity to create a new memory with her in a place that meant so much to me in my youth.

We left the park, walked through the baseball diamond across from the high school, crawled under the bridge and ran through the jungle back to our original starting point. “Did you have fun exploring with me, daddy?”

More than you will ever know, sweetheart. 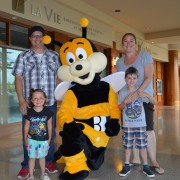 A Weekend To Remember At The Brookstreet Hotel. See Also: How To Tire Out Your Kids! 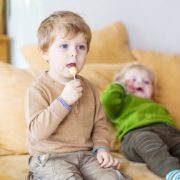 The First Cut Is The Deepest

Are We There Yet??

Bieber, Prostitution, Trophy Dads & My Rap on The Life of Dad Podcast
11 replies

Get To Know Zach Rosenberg!

A Night Away For Mommy
Scroll to top