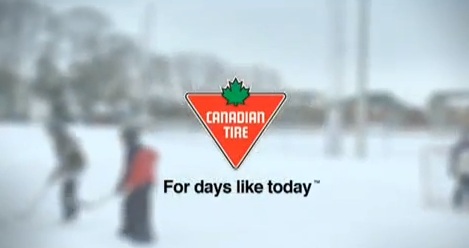 I believe very strongly in the power of giving. In the past few months, I have quietly started practicing a daily random act of kindness. It sometimes involves spending money but often is something as little as opening a door for someone or letting someone in line ahead of me. I never expect anything in return for any of this but I was lucky enough to be the recipient of some excellent news yesterday and I have to share it with you.

You may remember back in February, I posted an awesome commercial from Canadian Tire, that depicted a father and son going to the outdoor rink to skate and bond together. It was, and still is, my favourite commercial of all time. One of the commenters on the post mentioned that they hadn’t been able to afford skates for their boys but hoped it would happen someday. I’ve deleted that portion of their comment for their privacy.

The post faded into obscurity, as most blog posts do, until yesterday when I received an email from the people at Canadian Tire. They thanked me for sharing their commercial and asked for the contact info of the above noted commenter because they wanted to outfit her family with new skates. I’d be lying at this point if I said my eyes were completely dry after reading through their email and they didn’t get any dryer after speaking to the recipient of the gift. If I ever questioned what the ROI of sharing other people’s amazing content was, Canadian Tire answered it in incredible fashion.

I was already impressed with Canadian Tire for the way they portrayed the Dad in their commercial, but helping a family in need just put them way over the top in my books. When you do awesome things, especially in business, awesome things will come back to you. I hope creating two new life long loyal customers was enough for Canadian Tire in this instance, because they absolutely earned it!

On Comfort Zones, Inspiration and Being Vulnerable {#Dad2Summit}

We Day Is Coming To Ottawa!

Bullied Boy Fights Back With Kindness

The Most Awesome Snow White I’ve Ever Met

I Saw A Million Faces; Well, You Know The Rest! #BlissDomCA

We Day Is Coming To Ottawa! How Canadians Learn To Ride A Bicycle
Scroll to top