Blog Roll
You are here: Home1 / Blog Roll2 / THE BLOG3 / I’m Crafty and I Know It; Also, When Glue Guns Attack

There I sat with my son, staring at a pile of faux cotton, googly eyes, a marker and a glue gun; thinking, “What am I supposed to do with all this stuff?” I mean, sure, I’ve done crafty things before but nothing of this magnitude or importance. I had no idea how big this 100th Day of School thing was until I checked Pinterest for ideas. Yeah, that’s right, I said Pinterest, so what?! (PS – I even have my own account and everything…)

Anyway, as it turns out, people take this 100 Day thing very seriously! Some maybe even too seriously, but you didn’t hear that from me. We had picked out the idea for the monster shirt a few weeks prior and armed ourselves with the necessary tools to complete the job. If I’m being completely honest, although I didn’t expect my wife to take the reins on this one, I certainly hadn’t factored in the possibility of Daddy being the project manager. We all have our faults and this is one I am working on.

After being informed of our upcoming contract, my son and I put on our hard hats and got down to business. He diligently counted out 100 (or so) googly eyes, while I carefully drew out the monster’s frame.

Once we had the framework done, we were ready to begin gluing the 100 tiny eyes to the shirt. This is the point that my son decided that Super Mario Bros on the Nintendo Wii was much more interesting and left me to fend for myself. Everything was going according to plan and I was even starting to get confident in my abilities. Apparently I was getting a little too confident and that’s when my glue gun decided to knock me down a peg…or four. Check out this battle scar.

Don’t worry, folks, I’m alright and soldiered through the rest of the project unharmed. Before I do the big reveal of my first major project, I wanted to provide some tips for other less than crafty Dads. First, don’t be afraid of trying crafty things with/for your kids. It’s not as hard as it looks, you can definitely do it and you will feel pretty good about yourself afterwards. Second, glue guns are hot, so try not to glue a googly eye to your finger because it will hurt and leave a scarlet letter on your finger for all to see.

Now let’s get back to business. Without further ado, I present to you our completed 100th Day project, the 100 Eyed Monster!

Seriously, this was a lot of fun to make and the pride I felt once it was finished was enough to make me want to create something else very soon. My kids and I have already decided on cardboard space ships for our next project, so keep an eye out for those very soon! I leave you with a shot of a very happy, monster wearing, customer! Cheers!! 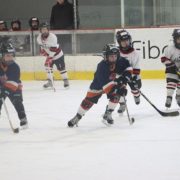 To Wrap, or Not To Wrap: That Is The Question

The Dads Are Invading Pleasantville! 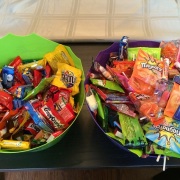 What To Do Now That Summer Is Finally Here!

The Time Santa Tried To Pull A Fast One
9 replies

It’s Time to Vote in the Starbucks Canada “Name Your Blend”... National Geographic’s Passport to Explore Sweepstakes
Scroll to top