Coffee might be the most used and discussed word on social media and rightfully so. I can still remember the exact day my love affair with coffee started. It was October 6th, 2003 and my life hasn’t been the same since! I was a late bloomer and didn’t get started until I was 25, which is probably a good thing because I would have gone broke spending $3-$5 a day in my early 20’s.

When I got my first Keurig, I had no idea what to think. It looked like a robot that dispensed coffee and we have since become good friends. I named him Roger. He’s good people. Where was I again?? Oh yes, the giveaway! How would you like to win a Roger of your very own?! Well, look down, I’ve made it super easy for you. Also, you don’t have to name your machine, Roger. It was merely a suggestion and you are free to name it anything you want. Like, Chris, for instance. That’s a great name that doesn’t get nearly enough credit.

The Grand Prize is the Keurig K70 Platinum Brewing System shown above (Model not included). I also have a secondary prize of some K-Cup variety packs in case those of you with Keurig’s want to take a stab at this. The giveaway ends Wednesday January 28th at midnight and is open to residents of Canada, excluding Quebec. Sorry, Quebec… 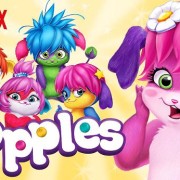 The Popples Are Coming To Netflix!

Sailun Tires ~ With You Through Every Turn

Today Is Mental Health Awareness Day; And So Is Tomorrow; And The Next Day

No Dress Rehearsal, This Is Our Life

5 Reasons Why Netflix Is Crushing It Right Now {Plus a Giveaway!}

Win A Quaker Prize Pack Including $250 In Gift Cards!
394 replies

The Art of Making Friends
Scroll to top