I’ve experienced a lot of emotional changes since becoming a father, but crying at a Stars on Ice figure skating show was probably the most baffling one yet. I attended the show with my soon to be three year old daughter and had no expectations about how she would react to it. As it would turn out, we both loved the show but this is far from a theatrical review.

I always consider myself to be a lucky father, in that I have a regular day job and weekends free to spend time with my family. The blogging has provided my family with further opportunities but even without that, I feel blessed to get as much time with them as I do. And as much fun as it is to do group activities, it is the one on one time with my kids that I cherish most of all. This is the time that they get to shine and it’s especially great for me because they show me sides of them I rarely get to give my undivided attention to.

In my daughter’s case, she is very excitable and also has a tremendously big heart. She is so excitable in fact, that we once had to walk out of Madagascar 3, but not for the reasons you would suspect. We had to leave because every time a new character came onto the screen she would yell, “Lion, Lion, Lion!!!” or “Zebra, Zebra, Zebra! We saw a zebra at the Zoo!!!” Hilarious and frustrating at the exact same time because she didn’t understand why we had to leave.

Watching her excitement at Stars on Ice opened up a whole new realm of emotions that I never knew I had in me. I melted at the way she would yell out when she recognized a song, clapped vigorously at the end of performances and especially when the pairs skaters hugged at the end of their routine and she remarked, “Aww, that’s so nice”. The kicker came during Kurt Browning‘s “Singing in the Rain” performance. My daughter was getting a little tired but I have always wanted to see him skate that one live, so we stuck around. She sat quietly on my lap, hand in mine, with her head resting on my shoulder and we enjoyed the final skate.

I’m not sure how to describe what happened next. I’m guessing it was a mix of the perfection of the moment, the grace of the performance and Brene Brown’s vulnerability speech stuck in my head but I was suddenly forced to fight back some tears. I still have no idea what happened but I’m pretty sure it had everything to do with that little girl and the pride I have in being her father. It’s a side of me I hadn’t seen before but is definitely something I am willing to embrace.

For those of you who don’t know Brene Brown, here is one of her Ted Talks. She spoke at Dad 2.0 Summit and I carried her message back home with me.

A Letter To My Daughter On Her 2nd Birthday 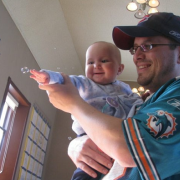 A Dance With My Daughter

Canadian Spotlight: My Interview With Kurt Browning Lego + Star Wars = A Great Giveaway From Tag Along Toys
Scroll to top