Blog Roll
You are here: Home1 / Blog Roll2 / THE BLOG3 / The Sting Before The Tears

I can still remember fighting back the tears on the long drive home with my Dad. I had just blown my chance to play softball for Team Ontario, a team he coached, and we both knew it. Just a kid, it felt like my whole world was coming to an end. How was I going to look my buddies in the face and explain how I couldn’t even make a team that my Dad coached?

The real truth, though, is that I didn’t belong there in the first place. I had a surgically repaired knee and a skill set that was slightly below the other players. We sat silently as I stared out the car window, feeling the familiar sting of emotion rising up inside of me. I wasn’t accustomed to crying in front of my father and I wasn’t about to start now. I wondered why he wasn’t saying anything and remember getting upset at the silence, even though I had nothing to say that wouldn’t have ended up in tears.

My Dad was good like that. Many years and many disappointments later and I’m thankful that I was lucky enough to have someone who understood that sometimes the best thing to say is nothing at all. As we got closer to home that day, he reached over, grabbed my shoulder and gave it a consoling shake, as parents often do. It was only an instant but was enough to tip my teetering emotions from controlled to suspect. I started to feel that sting you get in your chest when you try to fight the emotions away, and I lost the fight. He allowed me to continue staring out the window, trying to hide my tears as if he didn’t know what was going on.

This is one of my favourite memories of my father and I think it sticks because it’s a lesson that I hope to pass on to my children through my actions as a father.

Michael J. Fox Is Back, Baby! 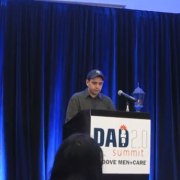 The Measure of a Man

A Date With My Daughter
8 replies

The RBC Believe in Kids Pledge ~ #RBCKids
Scroll to top