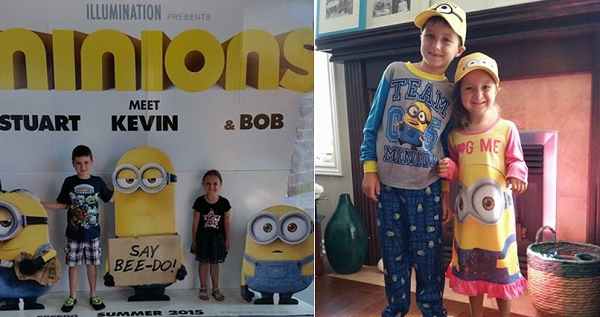 As huge fans of the Despicable Me franchise, to say that my family was excited for the solo Minions movie would be a huge understatement. My kids spent weeks speaking in unintelligible Minions voices (think banana, banana) to the point where I thought I was going to have to take a course to learn a new language. Luckily this was just a phase and the kids have since returned to speaking English and the occasional French. As you can see from the pictures above, they were all in on Minions and have been anxiously awaiting their opportunity to see the movie again on Blu-ray/DVD.

Lucky for them, their wait ends on December 8th when the Minions Blu-ray and DVD hits store shelves everywhere in Canada! I want to say that I’ll be able to wait to give it to them in their Christmas stockings but we all know I’ll cave on the 8th and pop it in the first night! The Blu-ray Combo Pack and Digital HD also come with three all-new mini-movies which my kids are going to flip over. Just to get your kids a little more excited, here’s the first of the 3 mini movies included with the Combo Pack!

In case you haven’t seen Minions yet, here is a brief synopsis of the movie:

Since the dawn of time, Minions have served (and accidentally eliminated) history’s most despicable villains. After their latest explosive mistake leaves them without an evil leader, the Minions fall into a deep depression. With the tribe on the brink of collapse, three unlikely heroes–Kevin, Stuart, and Bob—embark on a journey to find a new big boss. When their quest leads them to their next potential master, Scarlet Overkill (Academy Award® winner Sandra Bullock), our three heroes must face their biggest challenge yet: saving all of Minionkind…from annihilation! The film is packed with many celebrity cameos including: Jon Hamm (Herb Overkill), Michael Keaton (Walter Nelson), Allison Janney (Madge Nelson) and Steve Coogan (Professor Flux) and is a must-see this Christmas season.

In case that wasn’t excitement enough for you, I have 5 Minions Prize Packs to giveaway! Each prize pack includes the Minions Blu-ray/DVD combo pack, Minions beanies, Sticker sheets and Luggage tags. The giveaway is open to residents of Canada, excluding Quebec. Good Luck and don’t forget to pick up your copy of the Minions Blu-ray/DVD Combo Pack on December 8th!

Investors Group Stars on Ice Is Back!

How Much Do You Know About Osteoporosis?

Why Simply Shop When You Could ShopWise?
87 replies