Blog Roll
You are here: Home1 / Blog Roll2 / Reviews3 / The Age Of Electric Is Here! My Day With Ford Canada (#FordOttawa)
Share.... 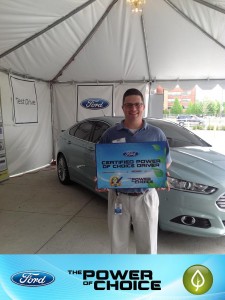 If you can get passed the handsome gentleman holding the sign, you’ll notice that in behind there is a beautiful looking ride.

That is the 2013 Ford Fusion Hybrid Energi. From what I was told, there are only 7 of these in the world, so of course I had to touch it!

I was invited by Ford to come and test drive some of their new energy efficient cars and to learn a little more about their upcoming projects. They had sandwiches, drinks and other things, like cars.

I was lucky enough to test drive 2 of the vehicles on hand. The first was the 2013 Escape with EcoBoost Engine. This is the most fuel efficient small SUV on the market. You have to keep in mind that my current leases are up this year, so the last time I went car shopping was 6 years ago.

Things have certainly changed. From the Keyless Touch Starter to the Microsoft Sync system, the Escape was definitely fully loaded. I enjoyed the reverse cam and how the side mirrors had blind spot indicators that old you if anyone was next to you. This was the vehicle I came to see. With a 4 piece family, we need something with a lot of room and that provides the safety my family deserves. The Escape did not disappoint.

I stuck around after my test drive because there was no way I was leaving without trying out the 2013 Focus Electric. It also gave me an opportunity to enjoy a couple more sandwiches. Did I mention the sandwiches yet?

Where do I start with the Focus Electric? It’s one of 6 new electrified vehicles that Ford will deliver over the next two years. Zero emissions? Gas free? It’s such a surreal concept but it’s happening. You notice it from the moment you press the touch starter and hear nothing. I thought the car hadn’t started but my Ford expert assured me it was go to go!

As I pulled out of the parking lot, I noticed something else. The car itself made no noise while driving it either. No engine sound, only the faint sound of the tires on the pavement. It drove like a hot knife through butter, totally smooth and effortless. I was very impressed with this drive and was glad I waited around for it. The only issue I could see was that without gas, you would need to charge this vehicle a lot, especially on longer trips.

Overall, I had a great time at the event and met some great new people. If you get a chance, head on over to Ford Canada’s Website and check out all the new Fuel Efficient vehicles they have in store for you.

The Important Lesson I Taught My Son

I Can’t Wait For @Disneyland To Open #CarsLand This June!

A Letter To My Daughter On Her 2nd Birthday

Wanna Tell You About The Girl I Love – To My Wife On Mothers Day Lucas Sings Episode 2: “Don’t Let Me Down, Helicopter”
Scroll to top