What I Watch On Netflix After The Kids Go To Bed 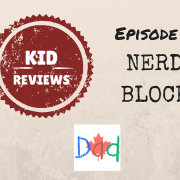 Watch The Epic Trailer For The Duckvengers & Win Stuff Too!
Scroll to top