Blog Roll
You are here: Home1 / Blog Roll2 / THE BLOG3 / My Blogging Story: From Hobby To Business
Share....

I figured I would write this sooner or later, so when the folks at InNetwork asked me to share my story as part of their #influencemktg campaign, I figured now was as good time as any. So, yeah, this post is sponsored by them, but I’ll be doing the story telling from here on out.

Oddly enough, my blog kind of fell into my lap. I have always had an interest in writing and while frantically entering domain names into GoDaddy’s search bar, I stumbled upon CanadianDad.com. Being that this was only a year and a half ago, I was shocked to see the domain name still available, so I scooped it up and began planning my new endeavour. Now I had never intended for this to be a business. I just thought it would make for a great place for me to share my stories and to practice my writing, until one day I signed a huge book deal and became wildly famous, like Bill Cosby! I definitely got the sharing and writing stuff down to an art form. The book? It’s going to have to wait.

A funny thing happened along the way though. I started receiving emails from marketing firms, asking if I wanted to write about their products and services. For a while, I would basically say yes to everything, and eventually I got so tied down with all the free press I was handing out, that I barely had time to do any writing of my own. That’s when I started learning about the business of blogging and how I could maximize my own potential in order to create a space I could be proud of.

In the year and a half that I have been running my site, I have narrowed down my focus to a few key elements. First and foremost, my goal is to encourage an active and engaged fatherhood, and to buck the media’s portrayal of father’s as lazy imbeciles. Next, I want to encourage kindness and the use of our voices to do social good. We spend all this time cultivating our followings on the social media networks, but what good are they if we don’t use them to give back to our communities and global networks. Finally, I want to help educate brands, PR firms and marketers understand that blogging itself, is a business, and if you want me to spend three hours coming up with a creative way to talk about and promote your company, that I will need to be compensated accordingly.

What started as a hobby for me has now turned into an amazing part time job, where I get the chance to attend conferences, consult with brands and bloggers alike, speak at events, raise money for charity and most importantly, give my kids experiences that I would have never imagined possible. I have been inspired on more than one occasion and I hope that I have inspired a few along the way as well. Blogging is more than just throwing a few words on the internet and walking away. It is a growing form of communication that covers everything from raising global awareness to talking about that new Eco-Store down the street. It’s a fast growing trend and it’s not going anywhere anytime soon.

Just in the short time that I have been blogging, I have seen tremendous growth in the personality and quality of the marketing pitches I receive. There seem to be a few companies on the cutting edge, who completely understand that not only is my time worth money, but also that the more creative your idea, the more likely I am to want to participate. I still get the mass mailings that address me as a Mom, but where I used to get upset and write about my displeasure, I now take it as an opportunity to politely write back and educate the company or firm on how I like to operate. It doesn’t always pan out, but it’s definitely better than acting like an angry maniac and I’ve made some really great connections with this approach. I’m looking forward to what the future brings for Canadian Dad and maybe someday I’ll get that Bill Cosby book deal.

And now a word from our sponsor. I took on this sponsored post because the pitch I received from InNetwork.Net was incredibly well laid out, with all the details of the post, a specific idea (that I was totally into) and a proposed rate attached. My dealings with their staff were all incredible and they gave me very little option but to accept. Part of me doesn’t want you to go to their site to sign up as an influencer because then there will be fewer jobs for me. I guess there’s nothing wrong with a little healthy competition though, right?

Thanks for listening to my story. Hopefully you’ll stick around to see where this thing goes next. 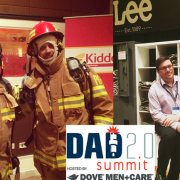 Let's Have a Caption Contest!

My Social Capital Conference Experience; Or, How To Earn Klout About Sheep

How To Create The Ultimate Home Theatre Experience

Why Are We All In Such A Hurry?
10 replies