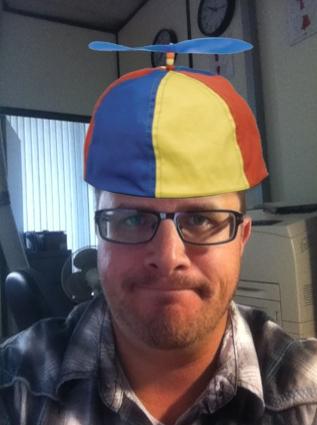 I like to think of myself as a pretty laid back parent. Not in an “I don’t care what my kids do” kind of way, but I’m definitely willing to let them explore the world and learn on their own.

I have to admit, I’ve even chuckled to myself at times while watching parents’ who follow their kids around the playground, petrified at every turn! That was until this weekend, when a neighbour mentioned something that shook me to my core!

Our kids were playing on a backyard seesaw, while I inconspicuously watched from the street…At one point, I noticed my son wandering dangerously close to the “see” portion of the seesaw and couldn’t help but yell out, “Hey, stay away from the ends while people are on that thing!” I didn’t even notice I had said it. I also didn’t notice that I had now crept across the lawn and found myself standing a foot away from the backyard gate.

After a few more nervous sighs, my neighbour exclaimed, “Don’t worry, he’ll be fine”, and I stopped dead in my tracks! It was official, in that moment; I had become the very thing I was laughing at in the playground! I laughed it off with her but in my head I had a totally different reaction.

You see, it was easy to keep an eye on them at the park. A lot of times I would even join them on the structures, not to hold their hands, but because I really like playing at the park and it makes me feel young. My son is now at an age where he is going over to other kids’ houses to play, without me, and that has started to conjure up some of the old anxieties that I thought I had rid myself of.

As it turns out, I am no different than any other parent out there. As I watched my son’s butt go flying a foot off the seesaw’s metal seat, I had a feeling of unease in knowing that the only thing I could do to save him from imminent disaster, was to tell him to get off of that deathtrap! I didn’t do that but it was definitely a struggle I had within the confines of my brain.

In the end, it was absolutely an eye opening and humbling experience and one that I won’t soon forget. In my battle for fatherly world dominance, I was knocked down a few pegs this day and have succumbed to the realization that while I want my kids to pave their own way in this world, it doesn’t mean I’m going to turn a blind eye to the path they choose.

Chopper on, folks! Chopper on!

The Thin Line Between Love and Hate

I’m Crafty and I Know It; Also, When Glue Guns Attack